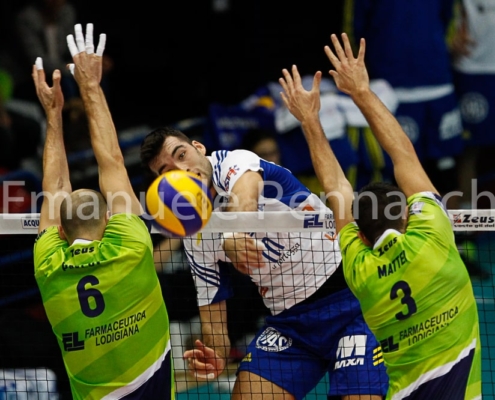 Calzedonia Verona wins 0-3 the race of Latina. A good test of strength for the Gialloblù team, able to win the entire stake against a team that in the first two rounds of the championship had won as many victories. The Calzedonia Verona shows a nice game, made of so much quality. Tatylor Sander is voted MVP of the match, Uros Kovacevic is the best scorer with 16 points.

Coach Giani confirms the starting lineup last Sunday by proposing Baranowicz in the control room, Starovic opposite, Zingele and Anzani in the center, Kovacevic and Sander crushers and Pesaresi free.
He calmed down, on the other side of the net, lined up the former Boninfante palleggiatore, Pavlov opposite, Mattei and Yosifov in the center, Maruotti and Sket crushers and Romiti free.
The start of the race is very balanced, with the two positive teams attacking. The first break of the race is Calzedonia, who after an insidious joke with Zingel signed 3-5 with Anzani. The same midfielder has the ball of the plus three, but is stopped by Maruotti. Baranowicz commits invasion and the race returns in the tie (5-5). Some action after the new break of Verona propitiated by the round in the service of Kovacevic; just the ace of the Serbian is worth 6 to 9 but Calzedonia does not stop here and arrives until 6 to 11. The reaction of Latina who with the wall of Mattei gets back in the wake of the yellows on 10 to 11, forcing Giani to time out. It takes a magic of Sander to close the break of Latina with the Calzedonia who comes in advantage of the technical suspension (11-12) but the hosts win the lead on 14 to 13 with Tailli and lengthen with Pavlov on 16 to 14. Again Sander, this time in the service, takes by the hand Verona that draws on 16 to 16. Final played point-to-point, Latina has the ball to conquer the first set point but Sket sends it out. On 23 to 23 Zingel, on the wall, and Starovic to close on 23 to 25.
Latina immediately gained a break of advantage in the opening of a partial second (2-0) which increased in the following actions. Kovacevic is walled by Pavlov /7-4) but just the number two crusher is essential for the quick recovery (7-6). The draw point is one of the most spectacular actions of the game, with Kovacevic rescued, Baranowicz raised and Sander’s very close shot (8-8). The turn at Anzani’s service sent the reception of Latina to a standstill with the Gialloblù passing on 9 to 11. It is an important advantage with the Calzedonia Verona that further lengthens with the turn at the service of Kovacevic up to the maximum advantage of 14 to 19. It is the Serbian crusher who puts the set ball on the ground, playing perfectly on the hands of the opposing wall, closing the set on 21 to 25.
Giani sends Gitto into the field for Anzani. Latina starts strong, putting great pressure with the service and to wall. On the 6-2 for the pontoons, Giani uses his first time out of the set and Zingel, returning to the field, immediately scored, followed by Sander (6-4). Calzedonia returned to play with great intensity; Gitto mura Pavlov then crushed the first advantage of the set on 9 to 10 then became the protagonist until 11 to 14, signed by the American Sander. Latina is back in the game, draws on 18 to 18 but in the final is still Verona to return the protagonist. From 20 to 20, Calzedonia flies to 21 to 25, grounded by Kovacevic.

Emanuele Pennacchio Fotografia Vicenza-Ascoli 3-0
Scroll to top
We use cookies on our website to give you the most relevant experience by remembering your preferences and repeat visits. By clicking “Ok!”, you consent to the use of ALL the cookies.
Cookie settingsOK!
Manage consent